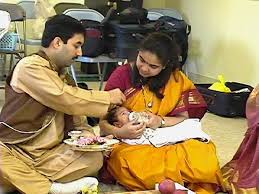 ﻿Namkaran is Hindu naming ceremony  Namkaran is usually the first big ceremony after a baby is born.Namkaran in Hindi literally means  the day when a name is given to a newborn baby.
As per shastra, Namakarn ceremony should be organised on 10,11,12th day from the birth of a child. If due to some reason it is not carried out on time than it can be performed after 30 days but before 40 days.
HOW IS NAMKARAN PERFORMED " A priest is usually called to perform the religious rites or puja. This usually accompanies a hawan or homa. Baby is bathed and dressed in new clothes. Friends and relatives are invited to bless the new baby. The priest would perform puja and consult  panchang to suggest a letter which is is as per baby's birth nakshatra . This is based on hindu astrology. Baby's horoscope is also drawn on this day. If parents have decided on a name, it is whispered in baby's ear by an elder of the family or by the father of baby..
These days the ceremony is conducted, but the name is not always kept according to the custom. Parents usually prefer to have a name which they like and have decided upon. So it is advised if  family has decided a name which is starting from a letter other than the letter of Nakshatra in such case the name by family can be kept and the name by pandit can be kept secret. Name by family will be used in all the thing like in school and in daily behavior where as the Janm name will be used in Marriage and future prediction.
After the naming ceremony a feast is offered to priest. Donation is also a essential part of this ceremony. One should donate the things( Vastra/ Pots/Money) to Brahmans on this auspicious occasions. This should be continue on every birth day.